If there is such a thing as destiny, I think that was Anakin's. He has always been different.


He was your brother. She wasn't introspective by nature; this had been in her mind since Anakin's exploits on Yavin 4, and she still couldn't get her hands around it. My feelings tell me it's something important, something we lost a very long time ago. But we have the Force, and each other. If the Jedi keep having 'successes' like this last mission, pretty soon there won't be any of us left. Zekk had been born on Ennta and was brought to Coruscant when he was eight years old. He made his own way in the rough lower levels of the city-planet. Jaina's parents had kept living quarters in the city's prestigious towers for most of her life, but she had spent sur-prisingly little of her eighteen years amid Coruscant's artificial stars.

To Jaina, Coruscant wasn't home. It was merely the next logical move on the dejarik board. He settled back into the groove he'd worn into the seat over the course of two years and more battles than he would ever admit to fighting. A light on his console flashed, signaling a communication from Zero-One, the battered Q9 droid Kyp had recently bought cheap from the estate of a Mon Calamari philosopher.

Kyp smiled briefly and shoved a hand through his too-long dark hair. Now even droids are questioning my motives. A moment passed. He took point position. On either side of his X-wing flew six pristine XJ fighters. These were Kyp's Dozen, the newest members of an ever-shifting fellowship of heroes or rogues or villains, depending upon whom you asked. Kyp checked the navigation screen for their bearings. We should be coming up on our hyperspace coordinates before long.

Kyp grinned fleetingly. Our primary mission is to protect the ship carrying the Jedi scientists. We're flying in groups of four. Each lieutenant will name command targets. I'll assess the situation once we emerge in Coruscant space and revise our strategy as needed. Kyp liked herat least, as much as he allowed himself to care personally about any of his pilots. Her sense of fun was legendary among certain circles, and her warm, inviting smile had probably started more tavern brawls than a badtempered Gamorrean.

Anyone who crossed Veema, however, soon realized that she had dimples of duracrete and a talent for holding grudges that a Hutt might envy.

She let out a sound halfway between a sigh and a purr. Care to introduce us, Kyp? I've nothing against the kid. A somber woman whose solid frame spoke of her origin on a high-gravity world, Octa had been shifting to an increasingly militant position for some time. She was the first Jedi to join forces with Kyp-that is, if you didn't count Jaina Solo's temporary and Force-assisted cooperation at Sernpidal. Jedi for Jedi-I've no quarrel with that! Maybe I should try to reel them in a bit. Anyone else want to get in on this? His comment was met with a moment's silence, then some uncertain laughter.

None of the pilots had actually seen Kyp's darker side unleashed, but all of them had heard stories. No one dared speak of what he'd been, and what he'd done. But it was always there. The Q9 unit let out an indignant bleep. This drew a burst of genuine laughter-partly because Octa's riposte broke the sudden tension, and partly because every pilot in the squadron recognized her humor as unintentional. Most commanders Kyp knew wanted their pilots silent and focused as they approached battle.

Kyp encouraged banter. It kept their minds occupied and allowed emotions to rise to the surface. He didn't know of any pilots-not live ones, anyway-who thought their way through a battle. The speed and ferocity of ship-to-ship combat was a matter of instinct, reflex, and luck. No one would ever mistake Han Solo for a philosopher, and he'd been flying longer and better than anyone Kyp knew.

When it came right down to it, what was there to think about?


The Yuuzhan Vong had to be stopped: it was that simple. After today's fight was over, let the dithering old folks debate how the enemy had managed to move on Coruscant.

He'd be off fighting the next battle. Kyp glanced at lightspeed. Once the and darkness. With a long experience as a while he could. Stars flared into existence, and every light on his control panel came alive. The Jedi glanced at the multitude of flashing icons on his display, each representing an enemy skip.

If anything, the droid had erred on the side of understatement. With a surge of dismay, Kyp realized he was leading his pilots into a maelstrom. The skies over Coruscant strobed and burned. Ships of every size and description hurtled away from the doomed world. A vast Yuuzhan Vong fleet awaited them. A few escaped, aided more by the general chaos than any coordinated defense. There was no sign of the Jedi wing. The Dozen swept in, holding their wedge-shaped formation. The only sign of their consternation was the silence coming from the open comm.

One of the Dozen, an early XJ prototype in pristine condition, dipped out of formation and started lagging behind like a distracted toddler. Kyp frowned. The pilot, Chem, was the son of a wealthy diplomat, a collector who'd filled a small warehouse with gleaming, never-flown ships. On his fourteenth birthday, Chem stole his mother's favorite ship and set out to track down Kyp's Dozen.

He hadn't asked for admission-just followed the squadron around from one mission to another. After several standard months, and the loss and replacement of more pilots than Kyp cared to count, he'd taken Chem on as a regular. Since then, the kid had vaped seven Vong coralskippers and squandered his inheritance on such frivolous things as new XJs, concussion missiles, and fuel. I'd hate to see you get a scratch on that showpiece of yours," Kyp admonished lightly. Under those circumstances, I'd rather face the warmaster himself than the ship's rightful owner.

You thought the Vong were mean and ugly?

Says if you'd stuck to it, you could have been the best nerf herder on Corellia. The short exchange broke some of the tension he sensed in each of his pilots. All but one. A deep sense of unease remained in the youngest pilot. He switched to a private channel. 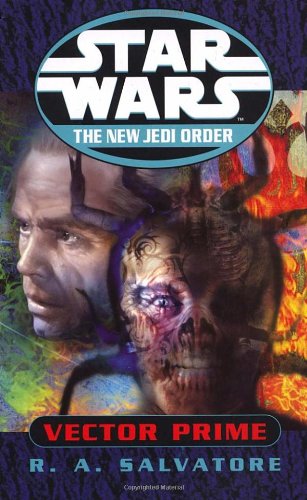 Coruscant's lights. Far below, the eternal, neversleeping city-planet was fading into darkness, facing its first true night since time out of mind. Yuuzhan Vong drop ships, big as mountains, blotted out vast portions of cityscape as they settled down to the business of slaughter. Blastboat analogs spewed molten rock hot enough to melt the glittering towers into dark slag heaps.

Enemy transports spat out coralskippers like obscenities. The rocklike ships whirled in a deadly dance, a meteor swarm choreographed by some unseen, malevolent power. Then a squadron of coralskippers swept toward the Dozen and a burst of plasma blossomed against Kyp's forward shield.